"By telling women that one way of birthing is better than another, we stop them from listening to their own bodies and doing what is best for them as an individual." 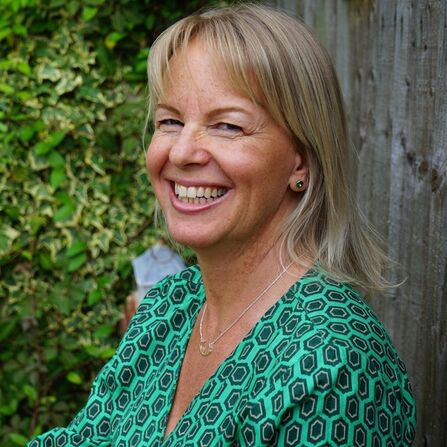 My name is Kristina Hansard but I'm known to everyone as Kicki. I was born in a small town called Asele in Swedish Lapland, the magical land of the midnight sun and the Northern Lights. I moved to England in 1990 and I have two girls born 1998 and 2000 at Watford General Hospital.

I trained as a Legal Secretary but was working in the IT industry before I had children and chose to stay at home and be a full-time mother. I came across the word doula in a Sunday Magazine and immediately felt that this was something I wished I had known about when I had my children. Having been away from my mother during my own births and postnatal periods, I feel strongly about being there for others when they embark on their journey of motherhood.

I trained with Kassandra Clements and BOND (British School of Nurturing Doulas) in London, July 2002. This course gave me the extra knowledge I needed and together with my own natural birth experiences,

I feel confident and honoured to be supporting women and their partners at this very special time of their lives. I hold a Diploma in Professional Relaxation Therapy and I have a Certificate in Social Sciences through the Open University and I was awarded with a BSc Open (Open) in 2011.

In July 2004, I attended a conference in Bristol and had the pleasure to meet Ina May Gaskin, who's book, Spiritual Midwifery is a must read for all pregnant women. I have also spent a day in Sheila Kitzinger's lovely house outside Oxford on her 'Birth Crisis' workshop. In June 2007, I was very excited to meet with the 'grandmother of all doulas', Penny Simkin. I had the opportunity to invite Penny back for a two day workshop in 2013, which I organised and she really is very special. These women are truly inspirational and I feel honoured to have met and spent some time with them. I also enjoyed meeting Dr. Jack Newman and to attend a study day on breast feeding with him here in the UK in 2010 and in June 2011, I organised a day with Michel Odent which was incredibly interesting. In 2012, I invited Kerstin Uvnäs-Moberg, who is a world authority on oxytocin, to come and talk to a group of doulas and other birth professionals and her books about oxytocin are fascinating.  I translated her latest book "The Hormone of Closeness" from Swedish to English and it's a book that I can highly recommend!

My latest course was with Penny Simkin and Phyllis Klaus in San Diego where I attended their "When Survivors Give Birth Educators Workshop".  This was by invitation only and I feel so lucky to have trained with two of the 'elders' of the doula movement.  Penny Simkin and Phyllis Klaus are two of the founders of DONA (Doulas Of North America) and Phyllis Klaus did the very first studies into the effect of doulas together with her husband Marshall Klaus and their friend, John Kennell.  It was a once in a life-time opportunity and I'm very excited to be carrying on the wonderful work that they have dedicated their lives to.  I offer "When Survivors Give Birth" workshops for birth professionals across the UK and Europe.

In 2005, I took part in a television programme called 'Mum + One' about doulas, which can still be seen on the Discovery Home & Health Channel. I also feel very honoured to receive the Pregnancy & Birth Magazine and Doula UK award of "Doula of the Year" in 2009.

I have been working as a doula trainer since 2006, travelling all over the UK, and I have trained over 900 aspiring doulas. I have setup my own Aspiring Doula Foundation Training, which is approved by The Doula Association. I also run my own 'Prepare for Birth' workshops and one-to-one birth preparation evenings. I have completed the City & Guild Award in Preparing to Teach in the Lifelong Learning Sector (PTLLS). I am fully insured and have been CRB checked.

I am very excited to have written my own book called "The Secrets of Birth" and I'm hoping that in some small way, I will be able to support and prepare as many women as possible for birth and motherhood with my book.  It was published in November 2015 after quite a long labour of love.  I am also a chapter contributor to the book "The Roar Behind the Silence". My latest book, Supporting Survivors of Sexual Abuse Through Pregnancy and Childbirth: A Guide for Midwives, Doulas and Other Healthcare Professionals was published in January 2020 by Singing Dragon.

My latest project is an education tool for use in antenatal and birth preparation sessions and it is called "Kicki Hansard's Path to Birth", which is an illustration of physiological birth.  I also have an on-line antenatal programme which provides a wealth of information and knowledge for women and couples as they prepare for the birth of their baby and life afterwards.

"If you think about it, childbirth is an event in a woman’s life where there is nowhere to hide.
It’s a forced transformation: she will gain a new identity; ​she enters her birth as a woman and leaves as a mother."